You are using an outdated browser, some site features may not function as expected. Update your browser for the best viewing experience. 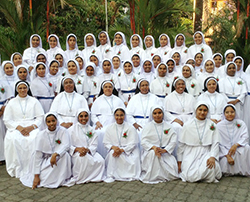 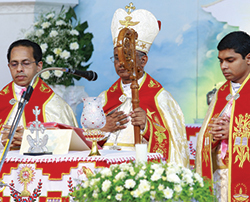 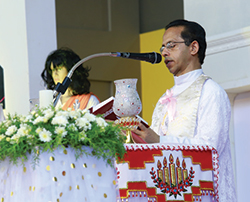 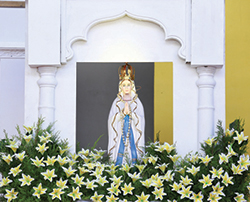 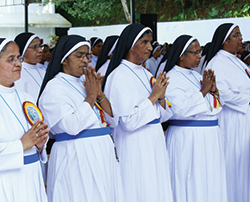 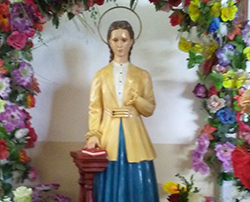 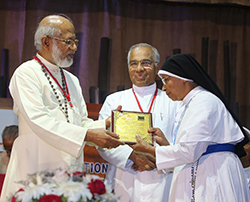 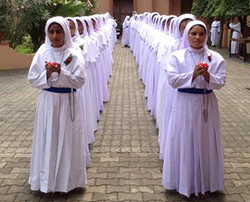 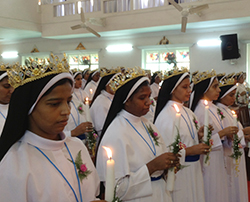 Sisters of the Adoration of the Blessed Sacrament (SABS)

The Congregation of the Sisters of the Adoration of the Blessed Sacrament (SABS) was founded officially on 8th December 1908, when the first members received the religious veil at St.George’s Church Edathua. It had its origin in the personal experience of the Eucharistic love and presence of the Venerable Mar Thomas Kurialacherry (1873-1925) the first bishop of Changanacherry and Rev. Mother Francisca de Chantal (1880 – 1972), the first member of the congregation. The community life of the members for the SABS congregation has begun at the Cattle shed at Edathua of the Servant of God Puthenparambil Thommachen, who was known as ‘Kerala Assisi’. The beginning of the first convent was on Dec.10, 1908 at Champakulam in the district of Alappuzha in Kerala state in South India.

Mar Thomas Kurialacherry says that even from his childhood, he earnestly desired to have a group of people to adore Holy Eucharist, the supreme expression of the love of God to mankind. He was fortunate indeed to have his studies in Mannanam and priestly formation in Propaganda College Rome, where he could deepen his love for the Eucharistic Lord. He used to visit the chapels near the school and College spending time with the Eucharistic Lord in adoration.. The long hours spent before the Blessed Sacrament in the Perpetual Adoration chapels instilled in him a deep personal relationship with Jesus in the Eucharist and an ardent desire that the Holy Eucharist be known, loved and adored by all, always and everywhere. He was attracted and influenced by the word of God “I am come to cast fire on earth; and what will I, if it be already kindled?” (Lk.12, 49). He wanted to bring all the people to the true faith and adoration which he considered would bring victory over the ignorance, faithlessness and adultery prevailing in his home land Kerala and  in India.

While a Seminarian in Rome,  he also had a vision in sleep that a group of sisters were adoring the Lord in the Blessed Sacrament in his home land. Thus a strong desire gave him the impetus to found a Congregation for women to adore the Blessed Sacrament constantly (day and night) like angels before the heavenly Throne. Following his ordination on 27 May 1899 Fr. Thomas Kurialacherry returned to Kerala as an enthusiastic young priest with the desire to begin the congregation. During a Sermon on “Devotion to the Sacred Heart" in his own parish of Kalloorkad church in Champakulam, a young widow, Philomina Vallayil experienced an unusual kind of joy and peace within her. After the sermon she met the priest and expressed her desire to accept religious life to adore the Lord. He in his turn hoped that she would be the right person to work with him to establish the new congregation that he had visualized. He enthusiastically blessed her saying “You have come to me today like a Chantal going to Francis de Sales and a Clare going to Francis of Assisi and your aims and intentions could be materialized only by Almighty God and His blessed Mother". (Autobiography of Mother Chantal)

Father Thomas, well aware of the risks and challenges involved in the founding of a new religious congregation, with a unique charism, placed himself totally into the arms of God with absolute trust. He gave spiritual directions to Philomena and other girls who wished to join the congregation and sent them to schools in a religious atmosphere. When he was the Vicar of Edathua, a neighbouring parish, he accommodated them in a cow shed of Puthenparambil Thommachan on 29 January 1908. It was their first abode, so that they may grow in a spirit of poverty and humility from the very beginning. Indeed the congregation is fortunate enough to have its origin in surroundings similar to that in Bethlehem, that they felt privileged to imitate Jesus, the poor of Yahweh so closely. They were shifted to a boat house owned by Thekkedathu Peedikayil Kurian Varkey opposite to the Edathua church after twelve few days.

On 8th December 1908, the first six members were given the religious veil as a sign of aspirants formally accepted in to religious life, thus marking the birth of the congregation. On 10th December 1908 the aspirants were shifted to the first convent at Champakulam. Amidst the preliminary hardships, he built a temporary sheds for the convent and school there. In 1911, by the divine providence Father Thomas was appointed as the new bishop of Changanacherry and thus was able to conduct the vestition of the first five aspirants of the congregation on 10th December 1911 as his first official function. Hence the new congregation was recognized and accepted by the founder himself. On 18th March 1916, the members made the religious profession at the Parel Church, Changanacherry.

The mustard seed that was planted in 1908, sprouted and flourished and the members grew in spirit and strength under the guidance and patronage of Bishop Thomas Kurialacherry. Though Bp. Thomas enriched the congregation with an intense spiritual leadership, he was called to his eternal reward on 2nd June, 1925 at the time of his visit to Rome. At the time of his death, the congregation had nine convents, seventy-three professed sisters, sixty-one novices and thirty-five aspirants. Later the congregation was nurtured and faithfully guided by Dr. James Kalacherry, the next bishop of Changanacherry. The first perpetual Adoration chapel was blessed on 2nd October 1935 at Vazhappally in Changanacherry, which was visualized by Bishop Thomas Kurialacherry.

At the request of Mar Augustine Kandathil, the Archbishop of Ernakulam and a devotee of the Eucharist, a group of sisters were sent to Ernakulam Archdiocese and a house was opened at Koratty on 7th May 1930. It became a free unit in 1948 with a new mother General and 4 convents. In 1950 Changanacherry diocese was bifurcated into two dioceses, Changanacherry and Pala and thus the SABS in Changanacherry was also divided into two free units of Changanacherry and Pala under the two mother Generals on 8th April 1952. When the Ernakulam Arch diocese was bifurcated in 1961, the congregation got a new unit in Kothamangalam diocese. Thus the growth of the congregation being fast and steady, the sisters were thrilled to reach out to all parts of Kerala to make known Jesus in the Eucharist.

Filled with missionary zeal, the sisters from Pala unit and elsewhere came forward to render their services to the emigrated people in Malabar at the request of Bishop Sebastian Vallopally and the first house was opened at Mananthavady in 1956. Gradually more convents were established and thus in 1965 St. Joseph’s Province Thalassery was erected. The congregation was functioned as independent units in different dioceses in Kerala following the same rule that the founder gave. To be united under one mother General became a necessity to get the constitution approved by the Holy See. Hence the unification efforts started in 1954. Rev. Fr. Eliseus OCD was appointed as the apostolic delegate for this. Later Rev. Fr. Francis Sales CMI was appointed as the President of the Unification process to help the congregation in the tedious job of amalgamation. It became a reality on 15th September 1963 when Mother Espirith was elected as the first Mother General of the Unified SABS Congregation. Thus, the long cherished desire to be united into one was fulfilled. Cenacle, the Generalate at Aluva was blessed on 18th March 1969 by His Eminence Cardinal Joseph Parekattil, the Archbishop of Ernakulam and is rightly called the powerhouse of the congregation, the force that binds all the sisters together.

It was rather a turning point in the history of the congregation to move out to other parts of India to extend God’s kingdom and to make known the Eucharistic Lord. At the request of Bishop Hubert D’Rosario, the then bishop of Dibrugarh in Assam, a group of sisters from Pala Province stepped out of Kerala to the far plunged North Eastern state of Manipur on 3rd December 1965. Thus, the first house outside Kerala was established at Hundung in Manipur. It was a leap into the darkness but paved the way to open more houses in the North. In the years that followed the provinces in Kerala opened more houses in the North, and started missionary activities to bring the good news to the people who have never heard of Jesus Christ. The sisters were involved in the field of education, healing ministry, social services and developmental programmes to uplift the people of interior villages of North and North East India.

Now by 2022, we have 11 provinces in Kerala and 11 mission provinces outside Kerala in India. The fruitful missionary activities in India inspired us to venture in to the whole world to make known the compassionate love of the Eucharistic Lord. Thus we have missionaries in Germany, Italy, USA, Switzerland, England, Brazil, Ecuador, Peru and East Africa. In 2016 East Africa became a province with 91 sisters in 23 convents distributed 10 in Kenya, 9 in Tansania 3 in Uganda and 1 in Germany.

Today about 5000 SABS are the witnesses and transmitters of the Eucharistic Love throughout the world in 10 countries, drawing everyone to the Holy Eucharist. To make Jesus in the Blessed Sacrament known, loved and adored, we are engaged in different apostolic activities like Eucharistic, Education, Healing, Social and Family apostolates. The vision of the Founder and the Co-Foundress is still continue to ignite many a mind and is sure to shine on in the years to come.

The Process of Beatification and Canonization of the Founder of SABS Mar Thomas Kurialacherry was initiated in 1983 and the ‘Positio’ on his Heroic Virtues was submitted for the approval of the Sacred Congregation of the Canonization of Saints in 1996. It was studied by a team consisting of 8 Theologians and a Promoter of Faith and he was officially declared Venerable on Aril 2, 2011 by Pope Benedict XVI. The tomb of Venerable Mar Thomas Kurialacherry at the Cathedral church Changanacherry is a pilgrim centre where the people of God pray fervently the prayer of intercession. Now we are prayerfully waiting for two first class miracles through his intercession to be accepted and acknowledged by the Congregation of the Saints.

© 2020 Sisters of the Adoration of the Blessed Sacraments (SABS) . All Rights Reserved. 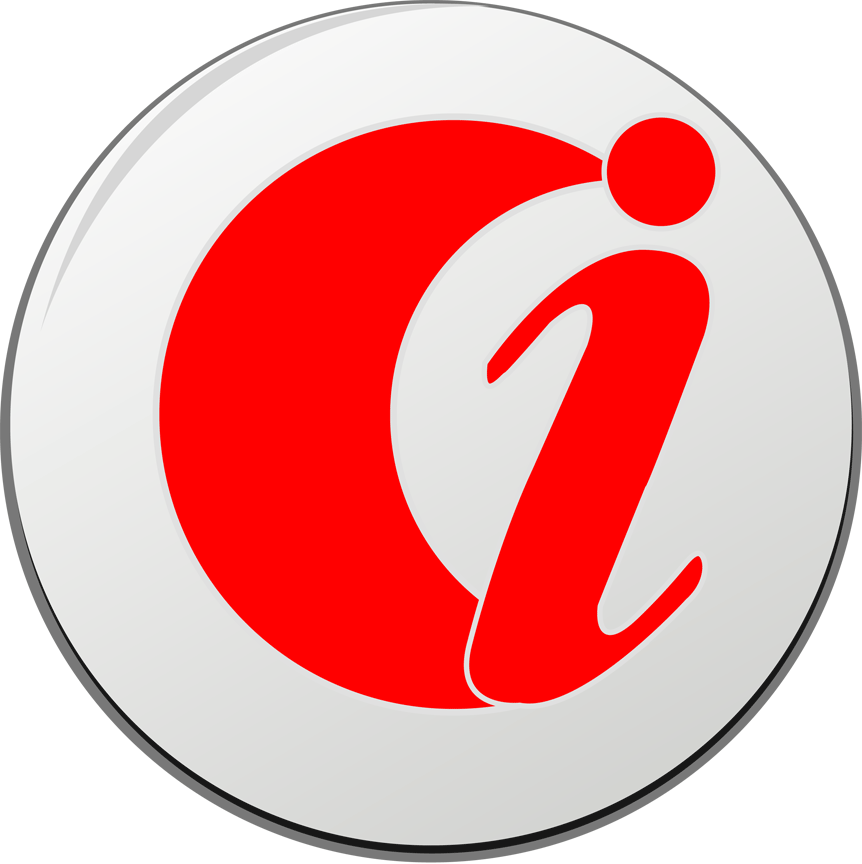